Television heads over the top

Yet more evidence consumers are driving change in the way broadcasting works comes in the latest Infonetics research reports that claim Pay TV incumbents are losing subscribers to new IPTV services in Brazil, Russia and Europe, even while Apple now offers the world’s most popular streaming TV solution, Apple TV.

“We continue to see strong growth among telco IPTV upstarts, like Rostelecom in Russia, GVT in Brazil, KPN in the Netherlands and providers in Eastern Europe where competition for new pay TV subscribers is particularly fierce,” said Infonetics analyst, Jeff Heynen. END_OF_DOCUMENT_TOKEN_TO_BE_REPLACED

YouTube appears more like a bona fide television channel every day: it has now begun serving up programming on a pay per view basis with a series of partnerships including some established TV brands and a handpicked initial selection of Creators.

[ABOVE:  Sesame Street aka The Jim Henson Co is among the first 53 channels available via YouTube subscriptions.]

Around 53 partners have launched premium content channels via the international service, and while the selection might be small you shouldn’t underestimate the significance of the step, which puts the Google service squarely in competition with cable and satellite providers. END_OF_DOCUMENT_TOKEN_TO_BE_REPLACED

Google has introduced a new feature that will eventually enable management of multiple YouTube channels from within a single Google+ account, which may not sound like much but should make it a whole heap easier for channel managers to keep control of their outputs — and suggests the way the network will evolve.

[ABOVE: PSY – Gangnam Style has attracted over 2 billion views on YouTube, the most of any video, ever. He introduced his latest track on April 13, how will this go?]

The world’s largest video industry trade show, NAB, takes place this month, driving Apple to ship an important Final Cut X update, Adobe to introduce new iterations of its video products, and a host of interesting new plug-ins from other developers. A few highlights from this year’s event:

3D printing for the people?

Crowd-funded via Kickstarter, FormLabs has taken a pretty big step toward making more accurate 3D printing something that’s accessible to any creative, from around $3,300.

Making 3D printing accessible in this way has the potential to transform industries, making it possible for relatively fast and easy product form prototyping and increasing the chance of the tech to spawn new enterprises. END_OF_DOCUMENT_TOKEN_TO_BE_REPLACED

We know Google is doing it; we’ve heard that Apple’s been looking at it, so just what is it? Video-enabled glasses with all the features you’d expect from a smartphone and the capacity to offer you augmented reality features, alongside motion and voice controls. So what impact might these tools have on creatives (If they become popular)?

The theory is pretty simple: All the business, landmark, location and other information you find nestled inside the best mapping apps; all the reviews, shared notes and historical information regarding destinations; and all manner of retail-related data (deals, discounts etc.) will inevitably be made available via these intelligent video glasses. END_OF_DOCUMENT_TOKEN_TO_BE_REPLACED

BBC, 15 years online, and the future of communications

The BBC is celebrating 15 years of BBC Online, revealing that since it launched its presence it now has an audience of 22.7 million UK adults a week, approximately 50 percent of which see iPlayer as the crown jewel of the company’s online offering.

[ABOVE: The second half of futurist Gerd Leonhard’s remarkably prescient presentation concerning the future of broadcasting in 2009.]

“Last week we surveyed a representative sample of 9,200 BBC website users and asked them to choose from the top moments over the past 15 years of BBC Online.

“Of those surveyed 50% said their top moment was the launch of BBC iPlayer, 15% chose the launch of the BBC website in 1997, 8% said the BBC’s first truly digital Olympics at the London 2012 Games this summer and 5% the launch of websites for children of all different ages – Cbeebies and CBBC,” said BBC director of Future Media, Ralph Rivera.

These statistics reflect the changing nature of broadcasting in the digital age. END_OF_DOCUMENT_TOKEN_TO_BE_REPLACED

Want to be a creative industry star? Join the Adobe Generation

These days when crafting any kind of creative content, you aren’t just working toward a single use experience, you’re building for multiple access devices so what you make should probably also look good on a tablet, computer or smartphone.

For example, data from the US claims 86% of tablet owners watched TV while using their device and 88% of phone users did at least once during the month. In the UK, 80% of tablet users browse the Web while watching their TV.  END_OF_DOCUMENT_TOKEN_TO_BE_REPLACED

There’s no doubt Apple’s mobile devices are incredibly handy for anyone working in the field: Long battery life, a good-sized display and 3G make Apple’s tablet almost as useful as a laptop — but a great deal cheaper, lighter and easy to lug around, while the iPhone is something you’ll usually carry with you.

We’ve been looking through what’s available to come up with this list of five iOS apps video pros may want to take a look at if they happen to take an Apple device along with them to work. END_OF_DOCUMENT_TOKEN_TO_BE_REPLACED

Broadcastpod — the professional broadcast studio in a box

This week we’ve been at Europe’s biggest exhibition for broadcast and film professionals, IBC, introducing our all-new product for broadcasters of all kinds, Broadcastpod. The best way to think about this new offering is as a fully-equipped video broadcasting studio in a box. (That’s our booth at the show in the picture below). 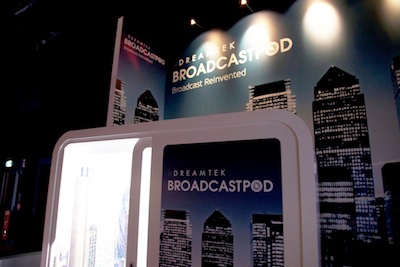